Trust The Zorbie To Absorb Everything That You Don’t Want In Your Spa!

The original Zorbie does a great job absorbing body oils, lotions, make-up, dirt grime and other contaminants that get into your hot tub water. Plus, due to its unique ion exchange capability, Zorbie also helps reduce spa & hot tub odours!

Zorbie’s tried and true flow-through action lets water pass right through while trapping odours and oils while absorbing about 20 times it’s own weight in un-filterable debris! To use, just throw your Zorbie into your spa (best when used near the filter).  The more stuff your Zorbie absorbs, the heavier it gets and eventually sinks.  When it’s really dirty and sinking, simply throw it away. Zorbie’s last about 30 to 90 days.

Zorbies are a unique product, made by mixing components in a proprietary formula; the components used have an innate negative electrostatic charge. Weakly bound, singly charged (monovalent) ions such as sodium and chloride are continually displaced. More highly charged, doubly charged (divalent) ions such as sulfate, ammonia or phosphate replace them, throughout the life of the Zorbie. It is ammonia that creates a growth environment for bacteria. The electrostatic charge found in Zorbies, allow them to initiate an ionic exchange process to adsorb as well as absorb.

Please do not ring out or squeeze your zorbie. 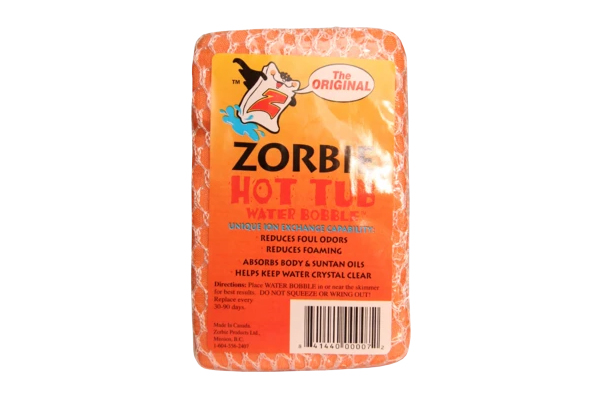